Children Are Tipping Both the Weight Scale and Healthcare Cost

Childhood obesity is a public health emergency. The Center for Disease Control calculates that 30% of children born after 2000 would develop diabetes. Moreover, there are numerous disadvantages of obesity such as diabetes, hypertension, sleep apnea, back pain, knee pain, depression, and pulmonary problems among others. These obese children usually become obese adults with increased risk of chronic diseases and premature death. Healthcare cost for this chronically ill population is expensive, and the cost will continue to rise if the number of chronic patients increases. 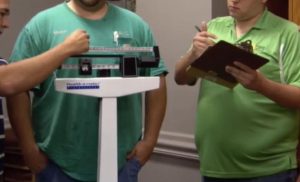 What is Causing the Child Obesity Crisis?

There are many reasons for a child to become obese. Social and cultural factors play a big role. For example, food advertisements have been shown to have a major influence on a child’s behavior. Children spend an average of 8.5 hours using media that contains unrestricted information and ads about food. Food advertisement companies are cultivating food habits and brand loyalty in our children from a very early age, which in turn influences parents shopping habits. In others words, we are eating what is advertised (junk food), not what is nutritious.

Some studies have shown that a T.V. in the child’s room increases the exposure of children to junk food that leads to a major risk of obesity and sedentary lifestyle. Our children are both snacking on their favorite food in front of the T.V. and watching ads that persuade their food choices. 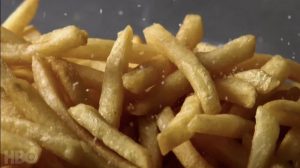 The U.S. food advertisement companies spend one and a half billion dollars in food marketing for children every year. Even though the fast food industry acknowledges the obesity epidemic in children, these companies have placed legal barriers to prevent a change in junk food advertisement.

A few years ago, the government intended to limit the amount of sugar per serving in kids’ meals and mandate main food companies to advertise healthy foods. However, food marketing is self-regulated. Some companies have changed the marketing campaigns by increasing messages about healthy ingredients in foods, for example adding labels of vitamin D and whole grains in some cereals.  These food companies have found a way to keep selling and receiving profits from the same products by simply marketing them differently.

Moreover, congress tried to implement nutrition standards for children’s food, which caused great opposition from the food producing companies. Food companies argued that their food is nutritious. As a society, we do not have a clear definition of nutritious food and companies use this argument to continue unhealthy food advertisements.

Who is Feeding our Children? 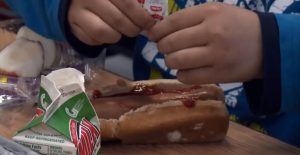 Food in the school cafeteria represents 80% of children’s caloric intake. Most children have breakfast and lunch at school. Unfortunately, 94% of school lunches failed to meet healthy food standards. Schools have implemented industrial production of lunches because this is more convenient, cost effective, and fast to provide at lunchtime. Indeed, 80% of schools lunches have exceed recommended levels of fat and saturated fat.

Also, professors mentioned the pressure for fast eating due to short break times. Sadly, 88% of parents think their children eat healthy at school and minimize the conversation about healthy eating, which should not come as a surprise since many people including some school boards consider ketchup to be a vegetable. Due to the food revenues at schools, school lunches have fought against the Healthy Hunger-Free Kids Act, which improves nutrition standards and hunger safety at schools. Schools want to continue the profitable fast food merchandise.

Another problem is the lack of exercise among children and adults. Physical activity is not required at schools because the extra school hours are dedicated to the academic curriculum. However, it is important to mention that exercise has been proven to increases academic performance.

Parents face a moral challenge because they decide children’s exposure to exercise and should be the main role model for their child’s physical activity. An obese parent is not the greatest example for a child who usually mimics their parent’s health habits. 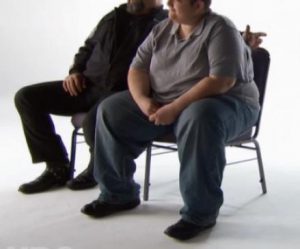 Sadly we are all participants in the child obesity epidemic. The community programs, the government, food marketing companies, farmers, and families are all stakeholders in this problem. Failure to intervene early may negatively impact future generations, increase healthcare cost, and raise poverty levels in this country. We are going to suffer the long-term consequences of poor diet and obesity as a nation.

However, the intervention should start from home. Sadly, only 10% of parents look for help with their obese children. Parents are not acknowledging the obesity problem because they do not want to feel that they are failing to provide a healthy lifestyle for their children and themselves.  Let’s start first by asking ourselves about our diet and exercise routine, the majority of us does not have a healthy lifestyle then how can we possibly expect a child to do the same?